Professor Gneezy talks about his latest work in behavioural economics and where he sees the field going. He then shares some insights on how governments can apply research findings to public policy. He also wonders whether incentives can change behaviours in areas where ‘common sense’ tells us something should not happen.

Disclaimer: BETA's podcasts discuss behavioural economics and insights with a range of academics, experts and practitioners. The views expressed are those of the individuals interviewed and do not necessarily reflect those of the Australian Government.

Elaine Ung: Hello and welcome to the latest podcast of the Behavioural Economics Team of the Australian Government, or BETA. My name's Elaine, and today we're lucky to be joined by Dr. Uri Gneezy, Epstein/Atkinson Endowed Chair in Behavioural Economics, and Professor of Economics and Strategy at the Rady School of Management at the University of California, San Diego.

Dr. Gneezy is known for his work in understanding how we're affected by small and large incentives. One of his most well-known studies found that introducing a fine for parents who arrive late to pick up their children from day-care actually increased the number of late coming parents, one explanation being parents could now pay away the feeling of guilt. More recently, his research examines different pricing models, such as pay-what-you-want pricing. Welcome, Dr. Gneezy.

Can you please give us a bit of background? Who you are and where you've come from?

Dr. Gneezy: I'm a behavioural economist. When I tell this to normal people, they ask me, "Is there any other kind of economist?" It's kind of funny to look at it. Behavioural economist to me means someone that actually tries to understand how people behave. In particular, I'm interested in incentives. How incentives affect behaviour. I'm a big believer that incentives affect behaviour. And understanding the way in which they do it is actually very useful. I'm currently a professor at the UC San Diego in the business school over there. Originally I'm from Israel I’ve been in different places in the world along the way.

Elaine Ung: How did you get into behavioural economics?

Dr. Gneezy: I wanted to do game theory. I took a class as an undergraduate student in game theory and I found it really, really exciting. When I dived, so when I started a PhD, it turned out that it's [game theory] much more mathematical than I'm comfortable with or I'm interested in. That's not my relative advantage. For a long time, I tried to do it and couldn't go anywhere, then a person called Jack Nash actually came over and gave a short mini-course for PhD students in experimental economics. I said, wow, I'm not smart enough to do game theory but this I can do. You don't have to be too smart for that.

Elaine Ung: Could you please walk us through your latest work? What have you been doing recently?

Dr. Gneezy: I think that the most relevant work relates to changing people's behaviour. We all have behaviours that we want to change. We want to exercise more, or lose weight, stop playing computer games, whatever it is. Turns out to be very, very hard to do. Even if the incentives are there already, we fail to do it very often. People lose lots of weight and gain more. People start exercising and succeed, and then go back to not exercising. The question is, how can we use incentives to actually change these kind of behaviours? Psychologists made big progress in understanding the psychology behind this. We are more interested in taking this into the real world. So, trying to actually change people's behaviour and to do it in an economic way in the sense that it won't cost too much, will be scalable, and [people will] do it.

It can also go into behaviours. Can we change unhealthy behaviours? Understanding how incentives work in these domains is my passion.

Elaine Ung: How could some of your work or findings be applied in public policy? Are there lessons there for government?

Dr. Gneezy: For government, even if you do ten projects and only one of them will work, that's already a lot. The more important lesson is to try and change the way people think. So, don't just think about, you know, that's what a smart person will do. In any process that you're implementing, try to think about the behaviour of people, the psychology of people. What will be the reaction to me doing this? What would people actually feel? I might really want to help people, but they will see it as if I'm trying to hurt them, I'm trying to save money because the trust is not there. How do you build trust? How do you make the interventions more acceptable to the other side? To really try to understand what would be the reaction and the reaction is not going to be as trivial as you might think. Even if it's going to help people on paper, it might not in reality. Trying to figure out what will work, that's the biggest thing, I think, for governments.

Elaine Ung: How would you apply behavioural economics in your everyday life? Do you B.E. yourself?

Dr. Gneezy: Right, so one example that I like is texting. Right? So, texting is something that, probably the dumbest thing we can do. We do lots of dumb things. You know, I had a big cookie before coming here, which I didn't need and now I feel bad, but those are small stupid things. Texting while driving, that's probably the dumbest thing that we're doing. Trying to look at ways in which I can change it in myself and in others, I think, is interesting.

One thing I found about myself is that if I'll allow myself to ... ‘Well, you know, now the road is clear. I can text’. Or, ‘now my son is waiting for me to pick him up, I'll just say I’m on my way,’ that's going to end up really poorly. So, the strategy that works for me is to say I'm not going to touch it. The phone is going to be somewhere else. I'm not going to touch it while driving at all. Zero tolerance, because otherwise it's a slippery slope.

One of the problems with this is the feedback that we get is really bad, because it's not that each time you text, you get into an accident. Actually, the probability is not very high. So once, if you want to text once, it's probably not going to end up in an accident. If you do it over five years, you're probably going to get killed or kill someone else. The feedback that we get is really poor in the sense that we do it, and nothing bad happens. We get reinforcement that it's not that bad. It actually is very bad. Understanding data and saying instead of deciding each time what should I do, but just categorically not doing it is actually easier.

Elaine Ung: So, what's next for behavioural economics?

Dr. Gneezy: So, I think that trying to understand what is it that works in the long run. That's a real challenge for us. We know how to change behaviour in the short run, in simple things. Right? We know that if in the buffet we put tomatoes in the front and the bacon in the back, people will be likely, for this specific breakfast, people might have better choices; better health choices. Whatever that means. But you know, it's much harder to change people's behaviour over time. So, to make people actually eat healthier, that's a much bigger challenge than to have a local change. We're learning how to do it, but that's the big challenge and the interesting one.

Elaine Ung: What's next for you? What would you like to work on next?

Dr. Gneezy: So, from here I'm going to Thailand—they tend to eat raw fish that they get out of the lakes, right? This raw fish has parasite in it, which causes inflammation, chronic inflammation that causes cancers. 20,000 people a year die from liver cancer over there—and trying to see how we can change these kinds of behaviours. So that's, you know, finding the behaviour of people with large consequences, like this. Or texting, or something. I'm trying to see whether we can use behavioural economics to change it. That's the challenge. We know how to use economics to change it. If I increase the fine on texting, the texting will be reduced, right? But at some point, you hit a limit that, for political reasons, for example, you can't change it. How can we use behavioural economics in places that common sense tells you that it shouldn't happen, and it does happen because we're human. How can we use incentives to change that?

If you'd like to know more about Dr. Gneezy's work, head online to the Rady School of Management website. Once again, I'm Elaine. I work at BETA, and this has been another BETA podcast with visiting academic Dr. Uri Gneezy. Thank you. 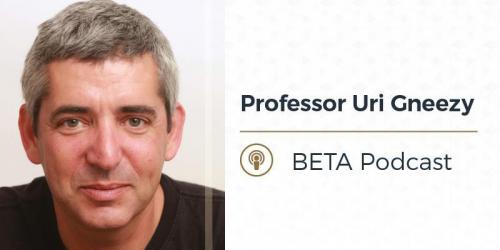